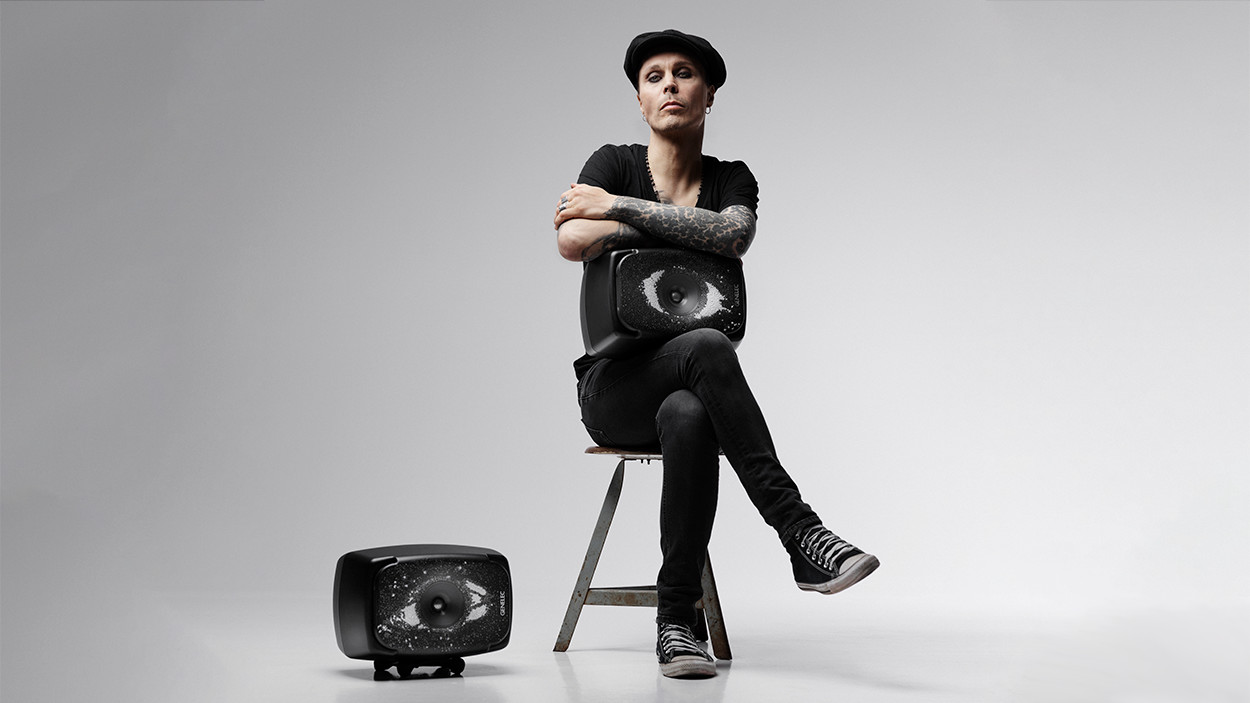 Iisalmi, Finland, October 2022… Finnish rock icon Ville Valo has joined forces with Genelec, the global leader in professional studio monitoring, to create a unique pair of 8341 ‘The Ones’ Smart Active Monitors, complete with custom artwork designed and executed by Valo himself. The monitors are to be auctioned to the public, with all proceeds going to support the Federation of Mother and Child Homes and Shelters (ETKL) in Finland (known locally as Ensi - ja turvakotien liitto).

As the singer, songwriter and co-founder of rock band HIM, Valo is one of Finland’s most celebrated musical figures, achieving international record sales with the band of over 10 million and scooping 8 of the country’s coveted Emma musical awards, alongside many international accolades. HIM were also the first and only Finnish band to achieve gold album status in the US. HIM released a total of 8 studio albums, during which time Valo also found time to record with other major national and international acts including Apocalyptica, Bloodhound Gang and The Mission. After HIM disbanded in 2017, Valo went on to release the Platinum album Ville Valo and Agents, and is currently working on his debut solo album Neon Noir, which is due for release on 13.1.2023.

Valo first encountered Genelec many years ago at Helsinki’s Finnvox Studios while recording with HIM, and currently uses the 8341 compact three-way monitors in his own private studio. Alongside his musical talents, Valo is also a passionate artist. Having painted water colours with his father as a young child, his musical career saw the album cover become his new canvas, which Valo has always considered an important extension of the more melodious aspects of what he does.

Commenting on his unique artwork for The Ones, Valo reveals that “Due to their coaxial design, I’ve always called them 'The Eyes', so it felt only natural to develop that thought a bit further and use acrylics to pointillistically depict a pair of eyes looking into the soul of the listener. In fact, the inspiration comes from the cover art of the Neon Noir album.”

At Valo’s request, all funds generated from the auction will be donated to ETKL, a nationwide Finnish child welfare organisation that helps children and families in difficult and insecure situations, preventing domestic violence and violence against women. These are long recognised as being global issues, with an estimated 1 in 3 women worldwide having been subjected to either physical and/or sexual violence in their lifetime. In 2021 the Federation helped more than 23,000 people in Finland, approximately 6,600 of whom were children.

“The proceeds from the charity auction will go to support our chat services which help adults as well as children and young people suffering from violence,” explains Tiina Muukkonen, ETKL’s Development Manager. “Given the distressing nature of violent relationships, discussing your situation in a safe, anonymous chat environment makes it easier to find help. The support of Ville and Genelec will help even more people affected by domestic violence to find help and solace.”

“The little ones rarely have the opportunity to be picky about the surroundings they're brought up in, and I honestly believe everyone should have a fair chance at life before they're able to make their own decisions about which direction to head in,” adds Valo. “I know there's not a whole lot we can agree on in this divided world of ours, but I'm pretty sure this comes close, and ETKL will do their very best to create a safe space for those that are in dire need of one.”

“ETKL is doing incredibly important work in helping victims of violence,” concludes Kati Pajukallio, Genelec’s Marketing Project Manager. “Low threshold help, such as chat services, can be the first step in finding a way to end a violent relationship. Being able to help ETKL in their work feels meaningful and purposeful, and I hope that this will have real impact on people´s lives – bringing them a future without fear.”

The custom 8341 monitors will be auctioned on eBay between 13th – 23rd October.