In Helsinki’s Punavuori, an elevator goes up to the sixth floor. A warm welcome can be heard from the office of Fried Music, and moments later a coffee break turns into a conversation. Finnish artist Lauri Tähkä swings by after a day’s session and producer of Tähkä’s next album, Jukka Immonen energetically arrives to the break room. We step in to his studio, where the Genelec 8351 studio monitors have been at work for over a year. We engage in a conversation about internationalization, music production and speakers. We invite you to catch up with one of Finland’s biggest producers and his company, Fried Music.

The two stories at Pursimiehenkatu contains 10 professional studios, 11 producers, songwriters, a production company, a music publishing company and the label EMI Capitol. In the spring of 2017, Fried Music opened a studio in Los Angeles, offering Finnish artists the resources they need to make it internationally.

The role of founder of Fried Music, Jukka Immonen, has changed as the company has grown. The Creative Director has recently directed his work towards the Los Angeles studio and Fried Publishing, a music publishing company that was established alongside the production company, co-founded with Teemu Brunila. Immonen takes artists and their work to international markets, seeks out the right collaborators and makes sure songs find their places all over the world.

Immonen has also been influencing the future of music education in Finland. He was a part of a group, commissioned by the Finnish National Agency for Education, that rebuilt the further vocational qualification for music production in Finland in early 2018.

Immonen still has time to produce music. Lately he has worked on new projects with Jenni Vartiainen, Lauri Tähkä, Vesala and Anna Puu. He has also worked as a music supervisor and producer on Finnish movies Veljeni vartija and Tom of Finland.

To sum it up, Immonen’s work is nothing if not diverse.

A speaker gift made the Emma winner smile even wider

In spring 2017, Immonen got to test the 8351 SAM™ studio monitors. That same year he also won the Producer of the Year award at the Emma gala, and he never would have guessed what he would also get from that award.

“I loved the 8351 monitors when I got to try them. However, I never knew that Genelec was going to give a pair of them to the winner of the Producer of the Year award! That’s how I got these!”.

Immonen has had experiences with Genelec from long before, as he’s had speakers from the 1031 and 8000 series. He liked to listen to music with them, but working with them was not ideal.

“However, the 8351 is a whole different beast! It’s very different from the earlier models”.

At first, Immonen couldn’t place the vocals, although the vocals would fit with some other setups.

“I’m used to getting the vocals really near to the body. It took me a few weeks to get used to the new monitoring, but now I’m totally in love with these”.

“It’s not enough to hear music, you have to feel it”

“I usually listen pretty loud. Now that I have two 7370A subwoofers, I can really blast a song and the lower frequencies play well. I kind of want to simulate the pressure of music you can feel during a live performance. However, these monitors are still great for working with low volumes as well.”

With the 8351 studio monitors, you can enhance things you want to hear only in certain space, and that way you can get the feel you want for monitoring.

“If I want to make certain frequencies feel a specific way in the body, I can do that with the 8351s”. 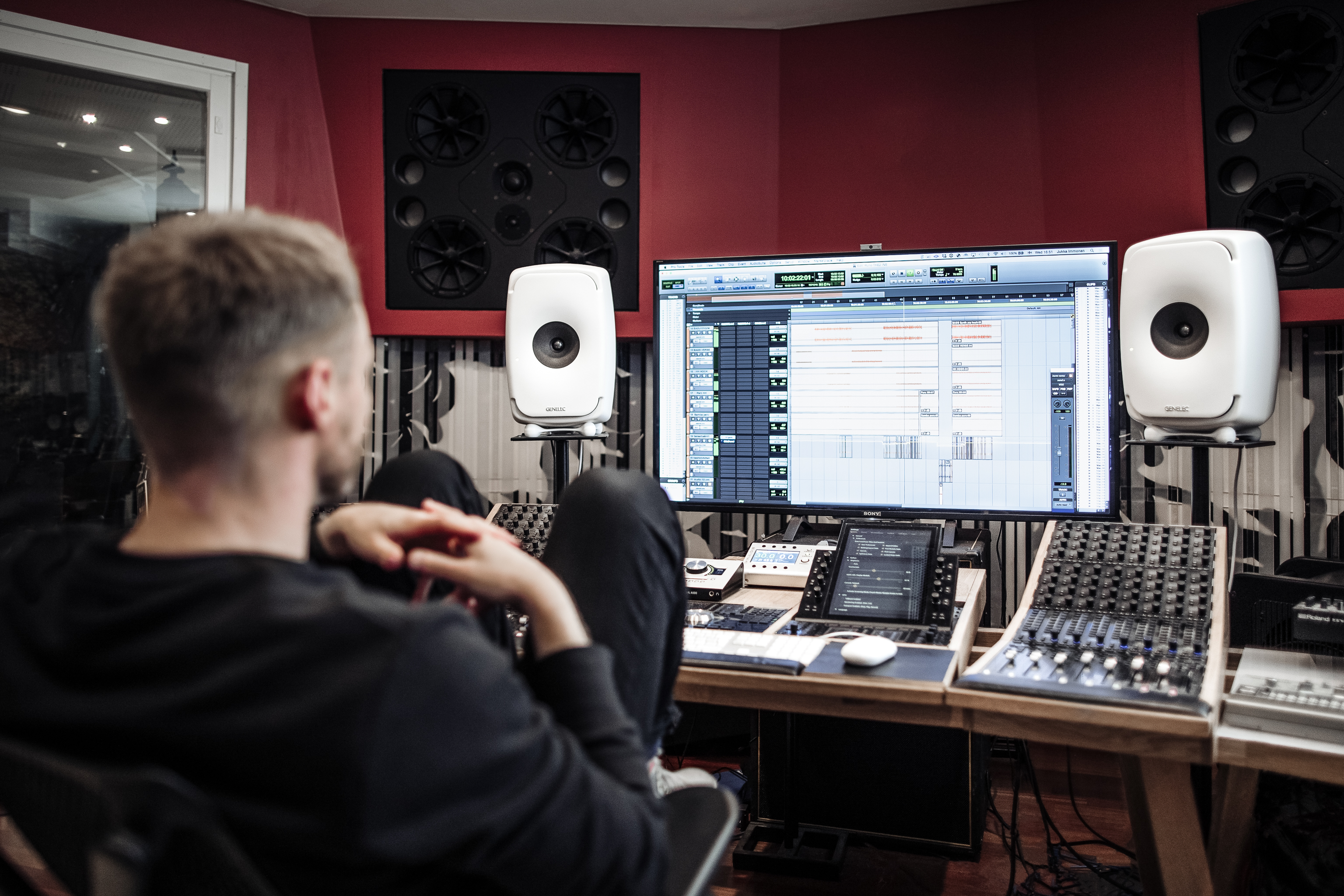 “It’s not enough to hear music, I must feel it. With the Genelecs I’ve tweaked the monitoring to the way I want it."

Monitoring is the most important factor – it guides the process

Thanks to DSP technology, the 8351 studio monitors can be profiled to have the exact monitoring experience the user wants. This way the monitoring supports the user’s work and the end result is what was intended.

“I can find a balance where the monitor brings out things I want to hear and I can make them sound the way I want. The Genelec 8351 makes it possible for me to ask the monitors to highlight something without ruining the mix. That is a cool feature”.

Immonen’s monitors were calibrated together with a mixing engineer and a Genelec professional. Adjusting studio monitors requires that the user knows their own workflow, which allows emphasis on different things.

According to Immonen, a studio monitor’s most important function is to convey emotion and allow the user to make bold moves.

Artists who work at the studio have also praised the monitoring.

“All artists have really liked it. If a studio has weird monitoring, artists react to that and tell you if they are not feeling it”. 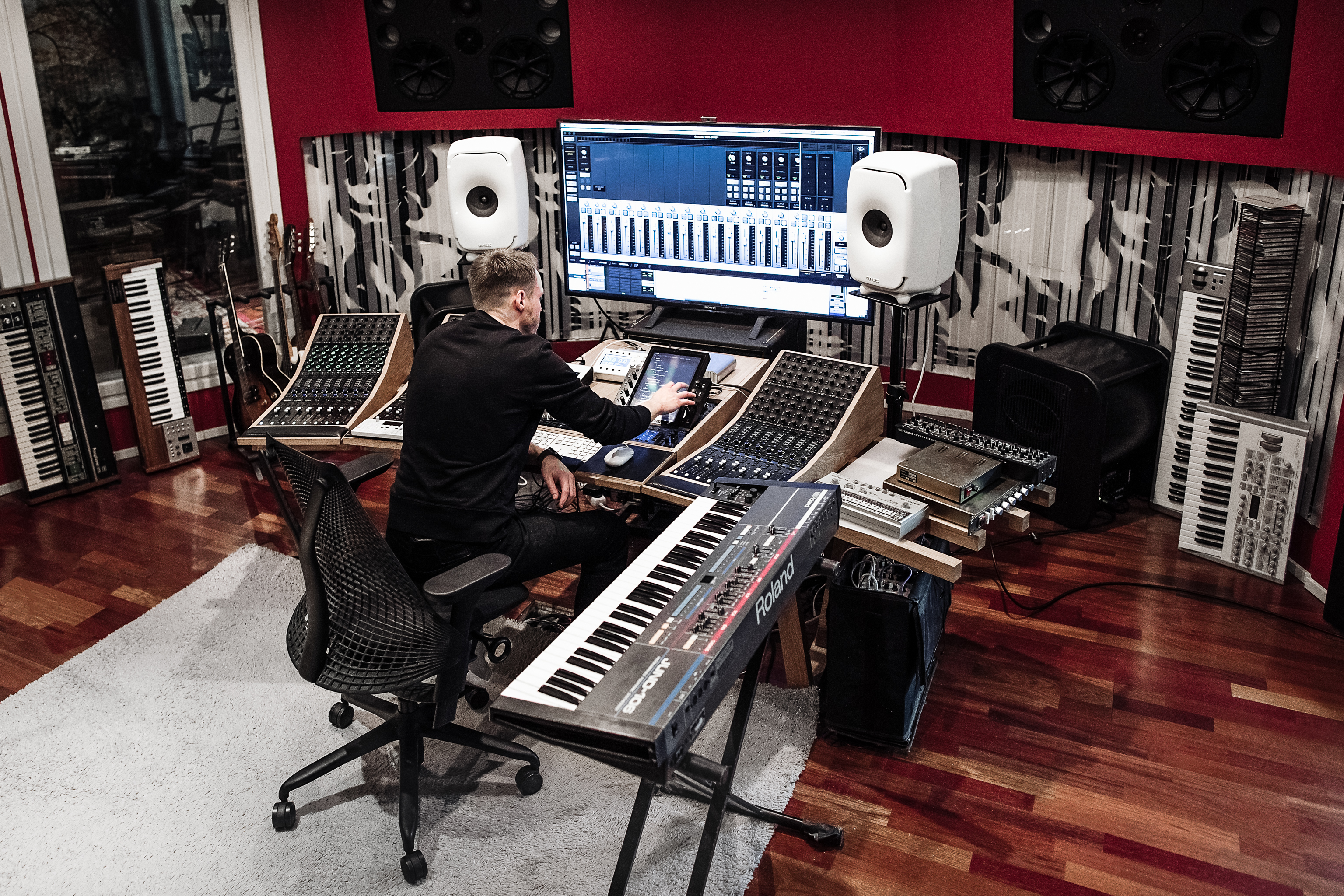 “Tweaking minor details is not essential, making something extremely loud or leaving something out is. A studio monitor must allow the user courage to make bold decisions”.

At its best, monitoring develops the user

Immonen strives to develop himself and learn something new all the time. With the Genelec 8351s, he has learned to make compromises. He says that he’s not fan of the popular, light and HiFi sound that has all the pieces fit together perfectly. However, he has begun to include that sound to his own, rugged sound palette.

“Genelec monitors have supported and guided me in making a compromise between grit and HiFi. I’ve even started to enjoy those nice tones and the cleaner sound.”

One of his first domestic productions with the 8351s was Anna Puu’s song Tarviin vielä yhden yön aikaa. The difference in production can clearly be heard behind the mixing console. Arttu Peljo, mixing engineer of the song, wondered what had happened to Immonen. Peljo, having worked with Immonen for over ten years, said that the sound of the song was drastically different from his usual sound.

“The Genelecs have introduced new things to me as a music producer. After Arttu’s comments, I deliberately started to think what I was doing differently, and what decisions I made with the monitoring”.

Immonen says that the monitoring with the Genelecs has undoubtedly had a big impact on his workflow.

“They save me so much time, as I’m quicker at making decisions. With Genelecs, I can finish the work much quicker”.

Monitoring especially comes to play when a song has a lot of material. Immonen mentions Vesala’s newest single Nyt on lähtö, co-produced with Eppu Kosonen, as an example of this. The song has multiple layers that create a three-dimensional sound.

“Usually I have to spend plenty of time creating layers and details by hand, and I need to take a lot of breaks in order to keep my perspective clear. Before, that would have taken a lot more time. Now, the Genelec monitoring helped us get the elements in their places much quicker”.

“Also, the music is much closer to a final version when it leaves my desk. These days I usually avoid mixing my own productions, but once in a while I’ve been mixing while producing, and the end result has almost been ready at that point”.

Jenni Vartiainen’s song Väärään suuntaan, number one on the Finnish charts at this moment and produced by Jukka, was finished so that Arttu Peljo only did the mixing on the vocals.

“Basically, it’s just a stereo track with vocals on top. I got it to a point where I thought it was great as it was. The song already had the feel that we wanted”.

“When a song is not yet banging, the monitor has to challenge you” Immonen thinks that a studio monitor should challenge the listener.

“A monitor speaker should not hold you back. Instead, it should ask you to do more when a song is not banging enough! Genelecs do just that, they demand enough from me”.

“I really care about the appearance of a workspace. You must look at the monitors throughout the day. I think the Genelecs are really stylish, and I like how they look in my space”.

Immonen mentions that the 8351s were extremely easy to fit into the room.

“At this point, these are clearly the best studio monitors that we’ve used in this space. We’ve strived to get the same balance at the Los Angeles studio as well”.

After the interview, Universal artist and YouTuber Saara started her YouTube live show at Fried Music’s studio. There’s no silence in Immonen’s world, but the sounds sure are great.

The equipment at Jukka Immonen’s workspace at Fried Music

Janne Lankinen from Genelec oversaw the speaker installation at Immonen’s workspace, and he told us how the sonic qualities of the room were constructed.

“Jukka’s room at Fried Music is very interesting acoustics-wise. Placing studio monitors from The Ones product family to the nearfield was a great solution for the midrange and stereo image due to their coaxial design, but unfortunately the low end caused challenges that ruined the sound.

The solution was to use two symmetrically placed subwoofers that were set to crossover with the nearfield monitoring, allowing the subwoofers to play the frequencies that were problematic in the nearfield. This also resulted in a setup that enabled better system performance on the sound level capacity front.

The Genelec Loudspeaker Manager (GLM 3) software was utilized, alongside with an acoustic measurement app, to calibrate frequency response, time-of-flight compensation, levels and subwoofer phase alignment. This resulted in a monitoring system that is as neutral as possible. Finally, to achieve the perfect end result, we did some tone adjustments according to Jukka’s wishes.