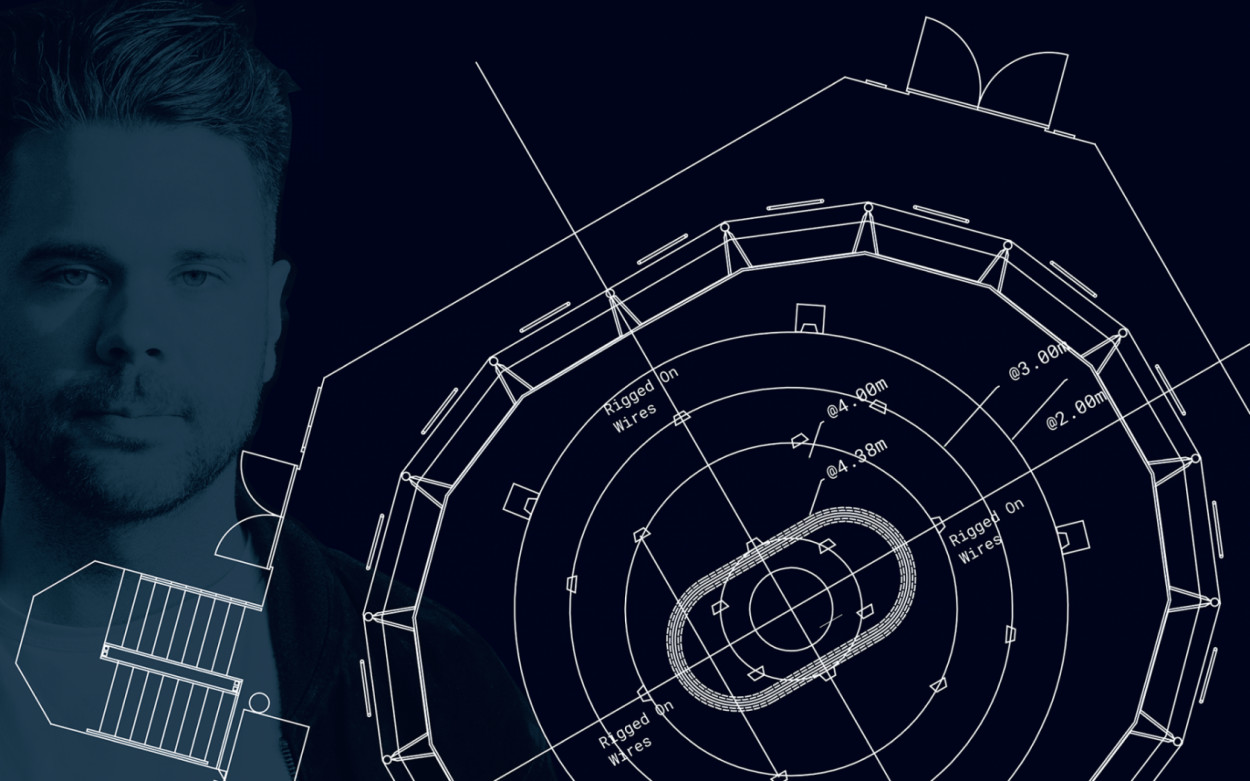 Together, electronic musician and multimedia artist Warsnare and immersive audio agency Call & Response (C&R) are pushing ahead with new techniques of enveloping sound and vision.

Together, electronic musician and multimedia artist Warsnare and immersive audio agency Call & Response (C&R) are pushing ahead with new techniques of enveloping sound and vision.

As the studio and live sectors embrace ‘360’ audio, Warsnare and C&R apply it to both disciplines in their creative mix – and have turned to Genelec monitoring to complete the picture.

At a recent show in London’s progressive Albany Theatre, Warsnare – aka London-born desktop conductor and Goldsmiths College composition graduate Daniel Potter – proved the theory that 3D sound is closing the gap between studio and live standards and that high-end monitoring of a highly delicate nature can replace the heavy sound reinforcement boxes of old.

Constructing a finely tuned surround monitoring system in the venue, Warsnare and the team from C&R deployed 29 Genelec speakers and four subs in a dome configuration designed to convey accurately the Ambisonic mix prepared at the C&R studios. “The human ear is most able to locate high frequency transient sounds,” explains sound engineer Tom Slater of C&R. “We took advantage of this during the mixing and spatialisation process: the relatively higher slew rate in Genelecs allows us greater creative possibilities when using higher frequency signals.”

Daniel Potter expands upon the performance. “Unlike a conventional concert with seating, the audience were instead free to wander around the space and experience the 360º sound in different parts of the theatre,” he says. “The live performers – cello, viola, percussion and myself on synths – were also spread out in the four corners of the hall and together we gave the audience a very unique wash of different sounds as we performed the album mixed through the 360° sound system. As well as being able to move sounds around the 3D space in real time, we were able to think about the mix in multiple axes instead of the conventional stereo setup. For example, in one of the tracks we placed the string harmonic effects in the very top speakers, close to the ceiling, and all the other sounds were mixed below this in layers.” 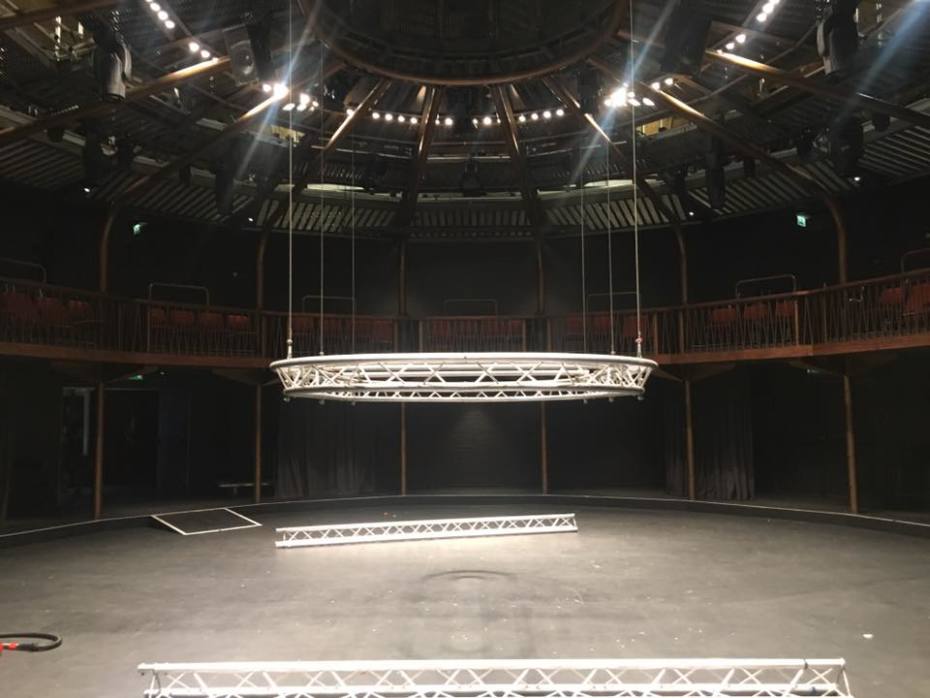 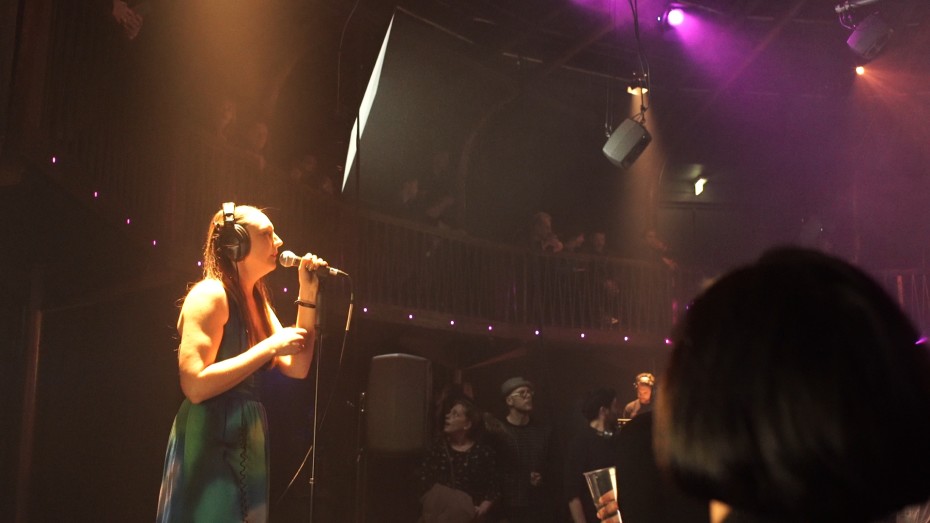 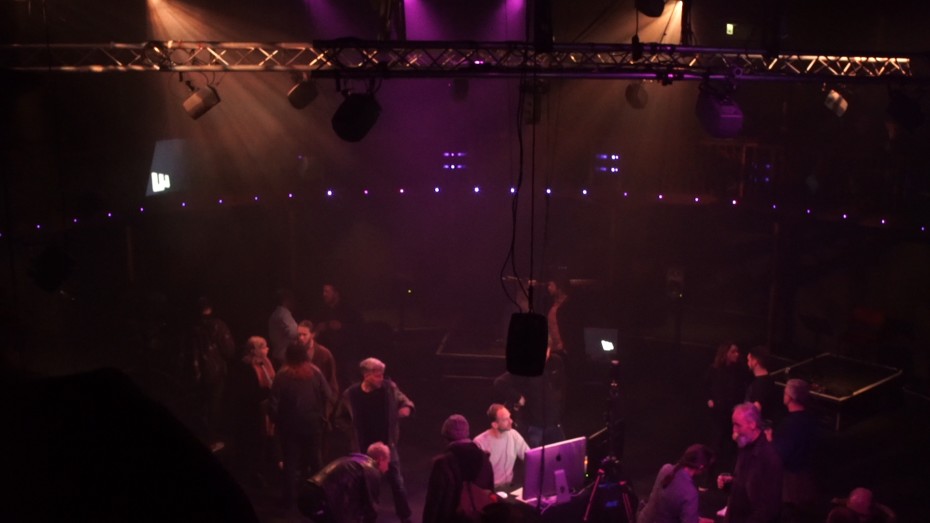 Eight Genelec 8050B and twenty-one Genelec 8030B compact studio monitors were installed above the in-the-round theatre space, creating a dome reaching 10m across and 7m high. “It wasn’t perfectly symmetrical but our Ambisonic decoder is able to deal with those types of irregular arrays,” continues Tom. “We had a ring of eight speakers just above head height, two more rings of eight at 4m and 5m high, a ring of four speakers at 6m and one directly above the centre of the dome at 7m. The venue space was slightly resonant at around 2kHz, but that didn’t really bother us as the audience had plenty of direct signal when they were inside the array. It could fit around 200 people within it.”

The use of Genelec active monitoring enabled much richer detail than a live audience might normally expect. “Aural immersion was our main aim,” confirms Tom. “We achieved this through a detailed sound design that would draw the ear to sonic events in a 360° sonic panorama. This would have been lost in a typically big, boomy live rig. We needed the kind of tight and accurate spatial imaging you would expect from a studio situation. We were then able to open out the sonic horizon with Ambisonic convolution reverbs and quickly close it in again. It was nice to have that amount of control over the audience’s perception of space and distance.

“The 8050s gave us a good frequency range at head height. Most of the lower frequency material was routed to these speakers: the kick, bass, some of the drums and lower synth parts. They also gave us the power necessary for the bass and percussive elements. I then routed the vocals, strings and higher frequency effects to the upper rings of 8030s. This gave a good sense of sonic separation and also emphasised the height of the space. I was also able to route most of the reverb signal to the upper rings as well.”

The C&R studio also uses Genelecs, specifically 8030Bs and 7050B subwoofers, very much with 3D production in mind. “The 8030s are configured in a cube formation: one in each corner of the room, one in the centre of each wall and one in the centre of the ceiling,” Tom explains. “We then place the subs at opposite ends of the space.”

But with an immersive audio festival planned for early in 2019, and with C&R at the heart of a vibrant ‘360’ video and VR scene, Tom believes firmly that immersive audio is going to transform live sound. “Definitely!” he stresses. “In fact, we’ve proved that already. It’s the perfect opportunity for artists and engineers to take a fresh approach to mixing, performance and writing.”

Daniel, Tom and the crew will be returning to The Albany Theatre for that forthcoming immersive festival. “I’ll be placing live, acoustic, un-amplified orchestral brass instruments between the loudspeakers surrounding the audience,” adds Daniel, “which will be mixed with the electronic sounds from the 360º system. At the moment, it is unfortunately expensive to set up and there’s just a small handful of clubs with permanent 360º systems installed worldwide. But I can feel things changing. Only a few days ago I went to a multichannel turntable performance by Shiva Feshareki and some students from Goldsmiths around the corner from me. Maybe I’m within a bubble, but with 360 video/audio and VR becoming more common and an increasing number of artists working with 3D sound I think we’ll see it become commonplace very soon.”