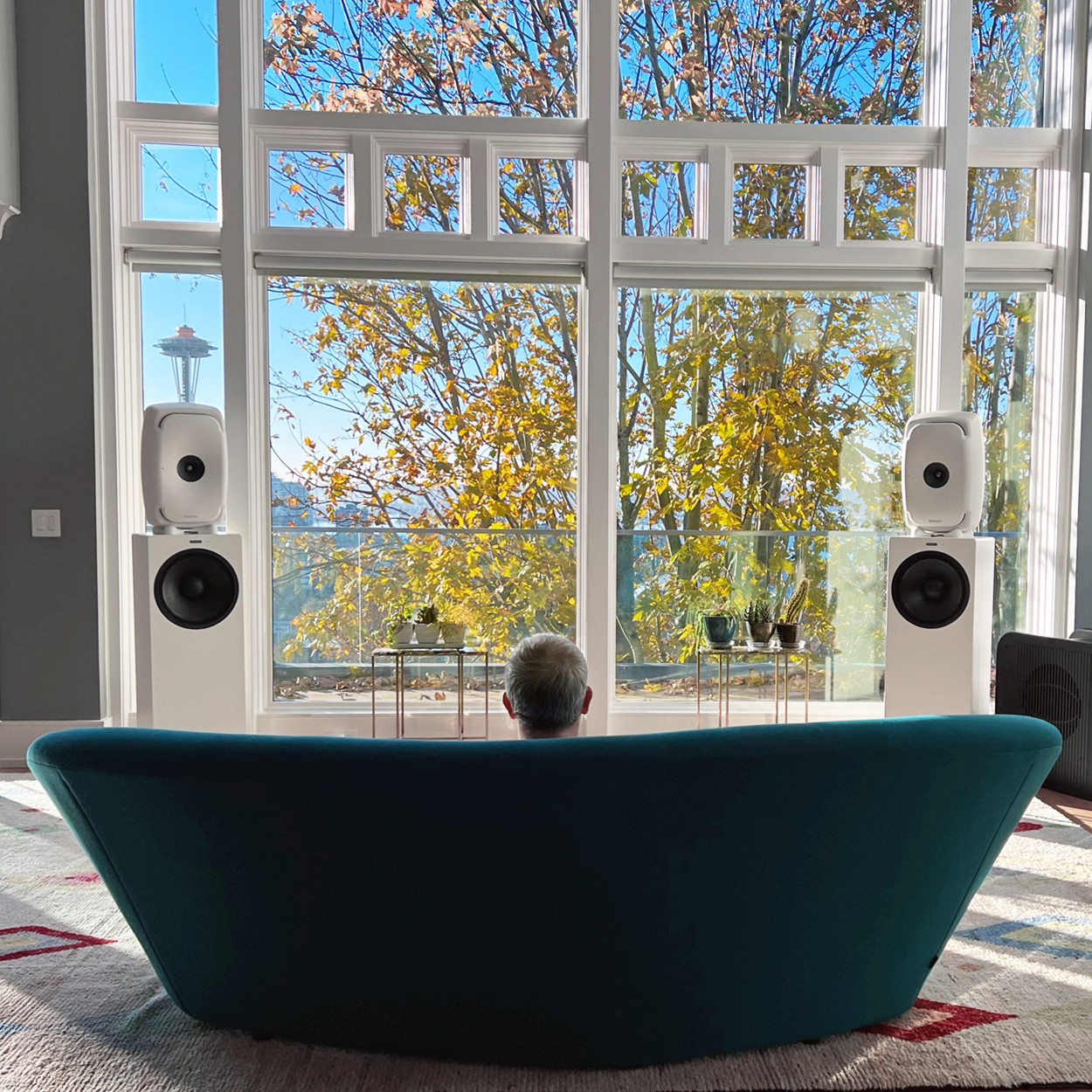 NATICK, MA, January 23, 2023 — Seattle-based tech industry professional David Yanacek is passionate about many things, and music and quality audio might be at the very top of that list. “Since I was twelve or thirteen, it’s been a constant quest,” notes Yanacek. “To find the cleanest, most accurate audio I could, within my means. Whether I was delivering newspapers or doing odd jobs, the money I gathered went to acquiring whatever gear I could. I’m not sure I qualify as an audiophile, but I listen to music very carefully, and accurate reproduction is something that makes a lot of difference to me. Well-produced music played on a clean, accurate system – I can really get inside the music, and there is nothing like it.” Recently, his lifelong goal reached an inflection point with the installation of Genelec 8361A ‘The Ones’ active loudspeakers paired with W371A Smart Active Monitoring Woofer systems and a 7380A subwoofer in a dedicated listening room in his Seattle home.

As a musician himself, Yanacek plays French horn and bass guitar and conducts a church choir. And as a music aficionado, his tastes run the gamut: classic artists of the 60s and 70s all the way to today’s electronic pop. He notes, “One specific part of this quest of mine to build the ideal listening environment is to be able to hear music the way that the artists and producers hear it when they’re in the studio, so it made sense to me to seek out the kind of gear that the elite studios use. That sent me down a road of research on the internet, and I had a pretty good idea of what I needed.” He contacted Bradley Sutton at AV integration firm Quartet, LLC, based out of Seattle, who was able to set up a Genelec demo for him. He was convinced, and Quartet was able to source the Genelec components and install the system at his home.

To say that Yanacek has been pleased with the system would be an understatement. “At the demo, I was blown away by the sound, but I was also impressed with the price. I would have imagined spending twice what we did for this result. I remember saying to Bradley, ‘This is perfect. It’s exactly what I’ve been looking for.’ Uncolored, powerful sound. One artist in particular that I’m hearing with new ears is Queen. All their 70s records are just incredibly produced with very clean sound and no noise. I also put on Daft Punk’s Tron: Legacy soundtrack, and the orchestral and electronic elements really shone through. A lot of more modern electronic pop has been a revelation on this system. Royksopp and Lorde for example, but the ones that blew me away were ‘Bad Guy’ by Billie Eilish and ‘An Eagle in Your Mind’ by Boards of Canada – hearing them on this system made me understand that music in a profound way and made me reflect on the techniques that producers use to give their music a sense of space and separate the elements in a song, almost like objects on a canvas.”

Yanacek had fun using the system’s proprietary software tools to generate the room’s “sweet spot” and set up multiple EQ presets based on the type of music being placed. Yanacek notes, “When I listen to EDM, I have a preset that really lets the bass frequencies be prominent. And the system has AutoCal and GLM – lots of manufacturers have tools like this, but nothing I have come across is as intuitive or work as well as Genelec’s calibration tools.”

He has been so pleased with the system that he acquired a separate Genelec setup of 8351As with AIC25 in-ceiling surrounds and a 7360A subwoofer for his downstairs TV area, which he and his wife use for viewing movies, and he just ordered a pair of 8331As with a 7350A subwoofer for his home office for music, games, and dabbling in music production. “I guess we are an all-Genelec house now,” he notes. “This is the listening environment of my dreams.”