It’s Game On for Genelec at Supercell HQ

null It’s Game On for Genelec at Supercell HQ

It’s Game On for Genelec at Supercell HQ 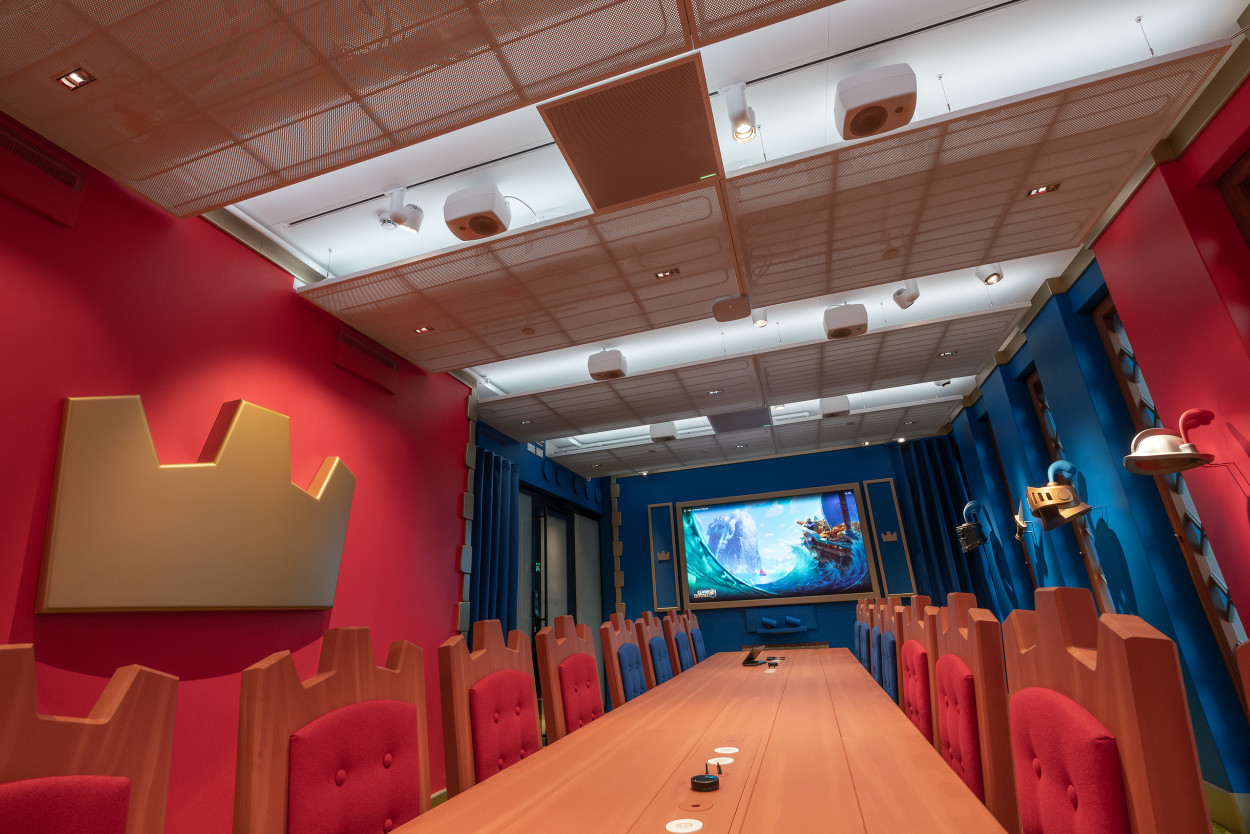 Helsinki, Finland – July 2022... From its much-loved Clash of Clans to the family favourite Hay Day and more recent releases such as Boom Beach and Brawl Stars, Supercell has become one of the most successful and profitable mobile gaming companies in the world. Now, Supercell have finally moved into their first custom-built offices in Helsinki – an impressive building named Wood City that has been designed from the ground up to represent the company culture and to encourage wellbeing and productivity. Nearly 500 Genelec loudspeakers have been integrated across the building, including some 300 Smart IP networked models.

Markus Haikonen is Head of AV and Broadcast at Supercell. “When we started to build the company’s new home, we needed to reimagine the spaces where we work,” he says. “We needed rock-solid AV project management, which is what Akukon did for us. We also needed a lot of help with the design, which Akukon and Audico did together.” Akukon are the number one acoustics and AV design experts in Finland. Akukon collaborated with AV solutions experts, Audico Systems Oy, who handled the systems design and integration.

“In designing these spaces – especially the team spaces and the meeting rooms – it was essential that they are easy to use, easy to monitor, and fit our needs. It also goes without saying that quality is really important to us,” continues Haikonen. “From an audio point of view, Genelec was an ideal choice, especially the new Smart IP loudspeakers. We’ve always been great fans of Genelec and use their loudspeakers throughout our offices globally, so it was a natural choice for this project as well. When we heard about Smart IP with its built-in DSP, we immediately saw that it would be a great fit for our team space and meeting room designs where there is no centralised DSP. We also wanted the reliability and flexibility offered by the Smart IP concept.”

Terhi Salo, technical specialist at Audico takes up the story: “Of the 500 Genelec loudspeakers installed all around the building, a little over 300 of them are 4430 Smart IP loudspeakers, while the rest are other Genelec active loudspeakers that have been repurposed from Supercell’s previous offices.

“Smart IP loudspeakers are ideally suited to large, complex installations like this because all you need to plug into the loudspeaker is one Ethernet cable,” Salo continues. “With that cable you get power, audio and the ability to control the loudspeaker and its DSP. Having them networked has been a huge help in configuring the system, especially during the commissioning phase when it was super-handy to be able to access the loudspeakers’ DSP remotely. For example, during the testing period, if anyone reported a problem in a certain area, I usually already knew what the problem was before my colleague on site got in the room!

“Regarding room setup and configuration, we have a variety of different spaces which required different approaches,” explains Salo. “For the Team spaces and the medium-sized Zoom rooms where the audio system is straightforward with just two Genelec loudspeakers, we used the speakers’ in-built DSP for EQ and volume control. In the larger rooms with more gear, we used Smart IP Manager to update the firmware of the loudspeakers, while everything audio-related is handled by the Q-SYS processor from QSC and then sent to the loudspeakers. The IP addresses were set up with a custom script created by my colleague, and the speakers were named in Dante Controller. Finally, now that the system is up and running, monitoring is carried out via the Genelec API using a custom Audico software.”

In the two largest meeting rooms, Genelec’s ‘The Ones’ coaxial three-way loudspeakers have been deployed as the main system, with 4430 Smart IP loudspeakers utilised for Voice Lift and as a delay system for the main speakers. A Voice Lift system uses a combination of strategically placed microphones and loudspeakers to subtly amplify speech, so that a person speaking on one side of a large room can be heard at the same level at the opposite side of the room – even if they're 30 metres away. Genelec systems also grace the main lobby, the gym, the cafeteria, and the staff entertainment facility. Many of the loudspeakers were subsequently painted in custom colours to blend seamlessly with the fantastic Supercell décor.

“It’s been a great project and we’ve been lucky to work with some amazing partners,” concludes Haikonen. It’s also been a long journey from when Genelec gave us a privileged first view of the Smart IP prototype, and then as soon as the first units were available, we started testing our design concept in our previous offices, right up to implementing it on a massive scale in our new building. It was a challenge for everyone involved but the results speak for themselves. We can all be proud of what we’ve achieved.”