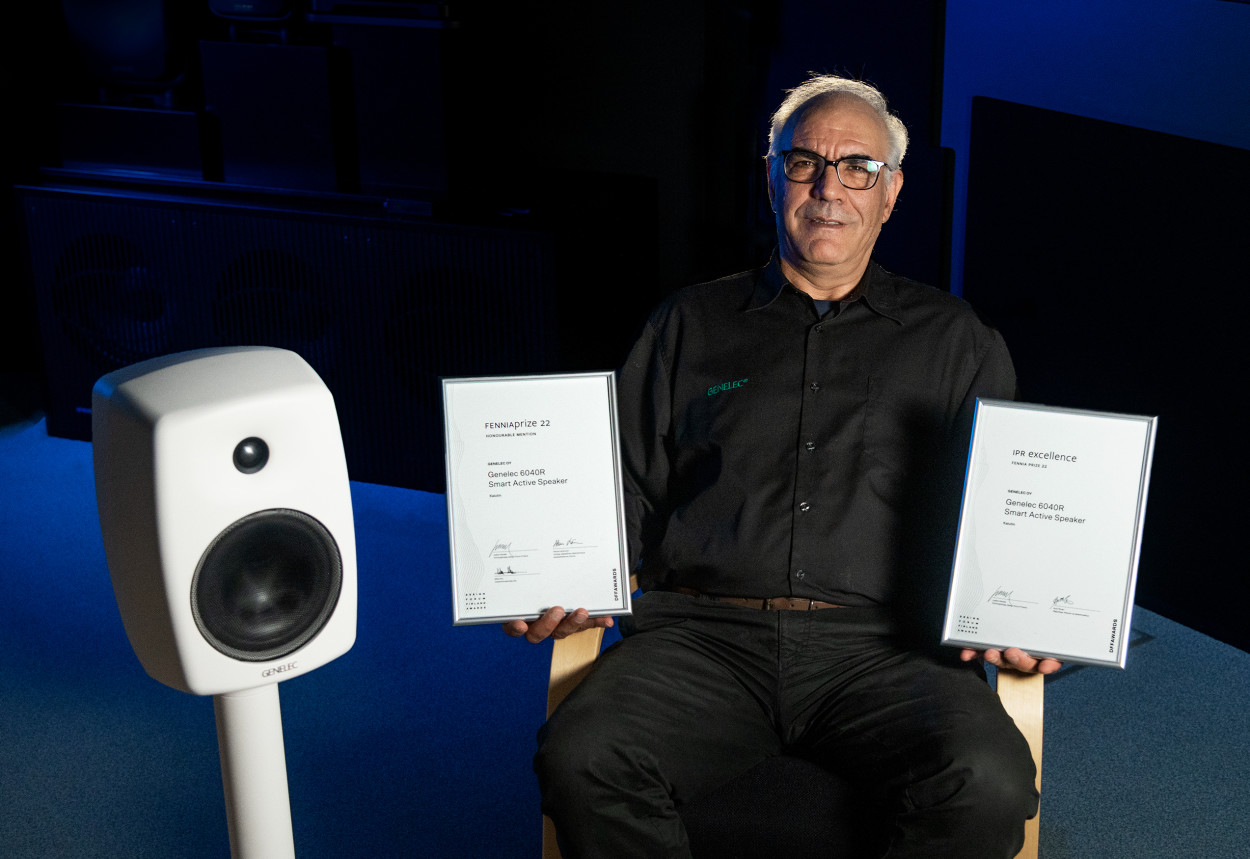 Iisalmi, Finland, May 2022... 20 years on from the launch of the original 6040 loudspeaker model, Genelec is delighted that its newly re-imagined 6040R Smart Active Loudspeaker has been recognised with an ‘honourable mention’ in this year’s prestigious Fennia Prize design competition, with Genelec also picking up the IPR Excellence Prize for its work in protecting its intellectual property rights.

Introduced in 2003, the Fennia Prize is one of Finland’s most prominent design competitions. Organised by Design Forum Finland and Fennia in cooperation with the Finnish Patent and Registration Office and Elo, the bi-yearly competition awards companies and organisations that use design extensively in their business operations. Judged by an expert panel, the prize winners must demonstrate high-class design competence with a focus on customer needs, innovation, design quality and sustainability.

The original 6040, designed in collaboration with leading Finnish designer Harri Koskinen, also achieved an honourable mention at the very first 2003 Fennia Prize awards, and this groundbreaking loudspeaker model marked the beginning of a long and successful collaboration between Genelec and Koskinen. Koskinen’s bold, minimalist Nordic styling has influenced countless Genelec models over the last two decades, bringing a unique voice to the aesthetic of Genelec loudspeakers and subwoofers. In both 2009 and 2017 this collaboration was recognised again by the Fennia Prize panel, with awards going to the 5040A subwoofer and 8351A coaxial loudspeaker respectively.

The newly re-engineered 6040R fuses the very best of Finnish technology and design, bringing exceptional performance and beautiful aesthetics to all lovers of high quality audio. Designed and built to the highest environmental standards in Iisalmi, Finland, its fluid curves are fashioned from die-cast recycled aluminium, creating a truthful, uncoloured loudspeaker that will become the aural and visual centrepiece of any listening environment.

Alongside the 6040R’s honourable mention, the IPR Excellence prize also forms part of the Fennia Prize program, and is organised by the Finnish Patent and Registration Office. Awarded for the commendable protection of intellectual property rights (IPR), Genelec was particularly recognised for the protection of its model rights, patents and trademarks. As a company whose R&D work is founded on technical innovation and the pursuit of excellence, close attention to IPR has long been a focus for Genelec, and the prize is highly valued and appreciated within the company.

“Genelec’s great insight was to intertwine the industrial and acoustical design of the speaker,” comments the Fennia Prize team. “Thus, art and technology design work together complementing eachother, and the result is more than the sum of its parts. Design is deep in the company’s strategy and all of its functions, having become a strong brand element and international competitive advantage.”

“Recognition by the Fennia Prize panel is a very welcome endorsement of our approach to design. 20 years after its original launch, we’re proud that the new 6040 continues to receive accolades for both its class-leading audio performance and visual aesthetic. As a company, we’ve long considered sustainability to be as important as profitability and sound quality, so the timelessness of the 6040 completely embodies our design philosophy. We’re confident that our customers will still be enjoying the sound and appearance of the 6040 decades into the future.”