Immersive Talk with ‘the dome.’

null Immersive Talk with ‘the dome.’

Immersive Talk with ‘the dome.’

Genelec recently dropped by for a chat with rising-star Swedish Producer, Mixer and Sound Designer, Gabriel Lundh, at his very own 'the dome.' studio in Stockholm, where he talked about his strides into the world of immersive audio.

Can you tell our readers a little about yourself?

My primary focus is working with object-based immersive audio (mainly Dolby Atmos), and I spend a lot of time thinking about how future sound experiences can benefit from immersive technology. I grew up in a small town outside Stockholm called Sigtuna, where I quickly found an interest in playing music. It led me to join a few bands, and that's where I got my interest in recording. Luckily enough, my father wanted to remodel our garage into a small project studio, allowing me and my two brothers to work and play music in there. Since then, music production, mixing and sound in general has been my main interest, and I've had the honour of working with it full time for almost 7 years now!

What can you tell us about your studio 'the dome.'?

My studio is part of the new 'Seven Studios' complex in Östermalm, Central Stockholm. I had the pleasure of being involved in the building of my room, which let me adapt the position of things and have the cables for my Atmos rig hidden in the ceiling. It's a rather cosy space of about 17 square metres - plenty for me, so far!

What are the key pieces of equipment in your studio?

When I bought the base of my current Atmos rig in 2020, I compared a huge number of different options for signal distribution, room tuning, sound cards etc. After doing a lot of research, I kept my existing sound card, the MOTU 1248, and stuck with Genelec Loudspeaker Manager (GLM) for system calibration and monitor control. Since my first Atmos rig in my previous studio, I've upgraded my L-C-R to Genelec 8341s and added one more subwoofer, which has worked beautifully. I also added another MOTU card, this time the 16A, to get more flexible audio/video routing solutions, and now everything is patched via AVB, which is super practical. 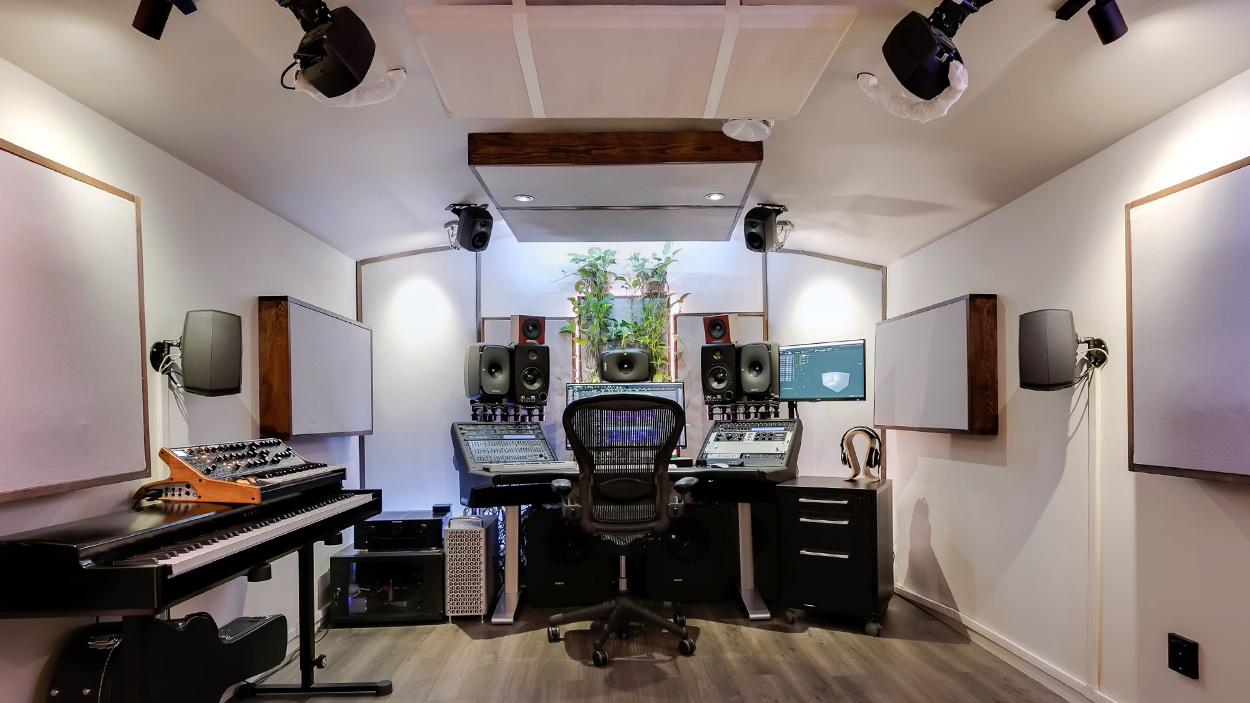 What kind of work have you been doing there?

Since I started freelancing, it feels like I’ve been doing everything in media production from flying TV camera drones, editing video, mixing audio, producing music, and doing lots of sound design and music for commercials. For the past two years however, I've mostly been honing my skills with mixing and producing Dolby Atmos music as well as assisting Swedish Producer, Peer Åström, in his audio work for companies like Netflix and FOX.

Why have you specialised in Dolby Atmos?

My preference for Dolby Atmos is mainly due to how incredible the integration with Pro tools is and how Dolby has garnered so much support for their format in terms of end user products. I want to be able to work creatively and not be stopped by any tacky workflows, and I feel Atmos gives me that. Dolby has also given me great support with my questions and studio calibration, the latter of which was done by genius Engineer David Ziegler.

What got you into immersive audio?

I've always been interested in immersive audio, even before I understood exactly what it was. Since I started working with audio in general, I felt that the digital revolution had taken the music industry a long way, yet by continuing to deliver mostly 2-channel audio to labels and end consumers we haven't been reaching our potential. This makes little sense to me, especially during a time when we walk around with super computers in our pockets. So, when my friend and colleague Fredrik Jansson reached out to me and asked what I know about Dolby Atmos, my answer was “Nothing, but I should really know more!”. Since that moment, I’ve been hooked on the concept of object-based audio.

What convinced you to build an immersive studio?

After researching object-based audio and zooming in on Dolby Atmos, I played around with it on my headphones for a week or so. After that, I pitched the format to some colleagues to see if they thought there was a future in it - about a year before Apple announced their support for Atmos. After a lot of positive feedback from my peers, I just had to go for it!

How do you approach immersive mixing?

I always try to future proof my work and use all the benefits Dolby Atmos provides. For that reason, I spend a lot of time in binaural, making sure the render modes are set the way I want them, and I also do a lot of QC checks in Apple Spatial. After working on so many songs, I feel my approach creates consistent mixes that translate the way I want them to over studio monitors, soundbars, car systems, Dolby Atmos binaural and Apple Spatial. Just to name a couple of key aspects of my current approach: I make sure I’m not using 'illegal panning', which is what I call panning inside a bed, in other words to a position between the monitors (channels). Instead, I use objects in these positions to make sure Dolby's binaural renderer sees the audio as its own entity. That stops it from binauralising multiple instances of phase coherent signal, which is what it would do if I'd pan between channels in a bed.

Can you tell us about your Genelec system?

Because of me not wanting to use Avid's MTRX, GLM has been vital for my setup, both for system calibration and the way it allows me to control system volume. I basically send line out audio at full blast from my sound card and let GLM attenuate the signal from there. My setup's been upgraded a lot since my first rig, and these days I have three 8341s as my L-C-R, four 8330s as Side/Rears, four 8320s for Height, and two 7360s for LFE and Bass Management. Having the two subwoofers allows me to bass manage all the monitors in my system, which has been key to reaching the specs required by Dolby. 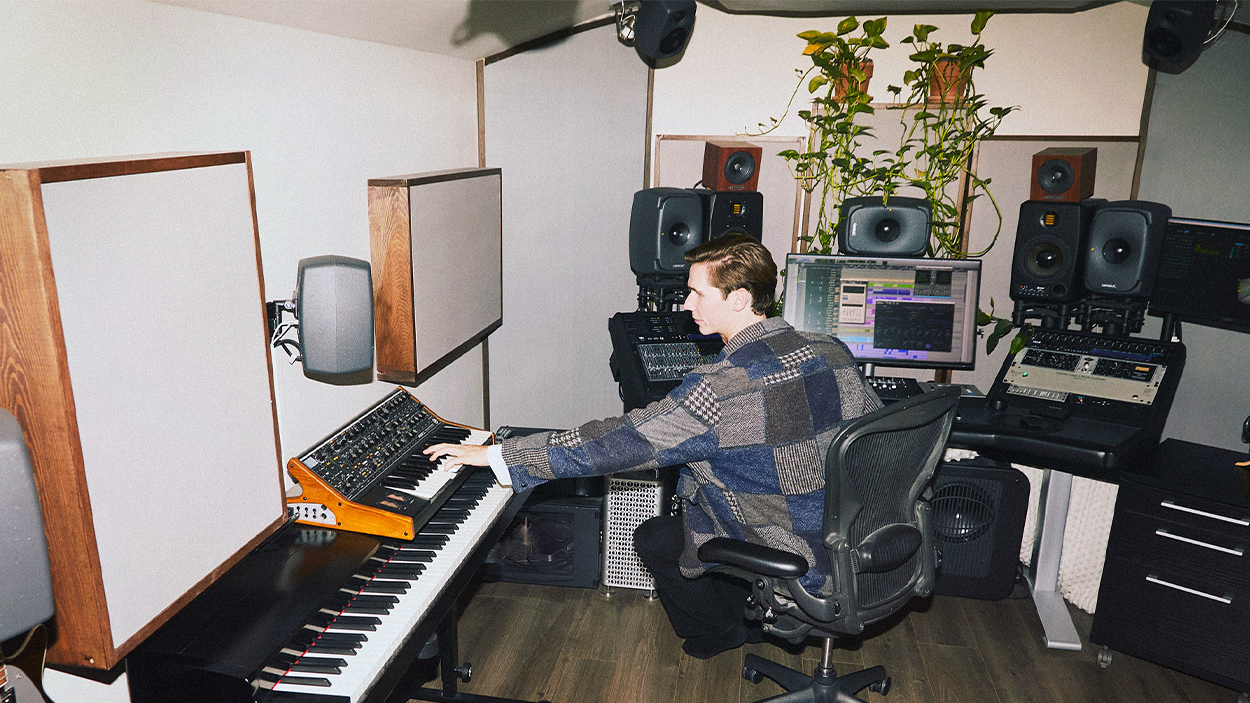 What immersive projects have you worked on recently?

So far, I've had the pleasure of working with a lot of different Swedish artists like Veronica Maggio, NOTD, Smith & Thell, Little Sis Nora/AronChupa and up-and-coming stars Graham Lake and Paula Jivén. I’ve also worked on the soundtrack for Fox's musical TV series Monarch, which was super fun! It's certainly been worthwhile upgrading to immersive for my business, but more importantly, for my development. Starting to work and experiment with Atmos on my own projects, as well as some indie projects, has been truly amazing. It's given me new perspectives on sound and pushed me to think differently, even in stereo.

How do you see the future of immersive audio in the coming years?

I'd like to see more implementation of immersive music in augmented reality and virtual reality environments, as well as Spotify realising the power of object-based audio. I think the key to immersive audio adoption is thinking of it as an investment for the future, not only for today.

To find out more about the dome., click here.