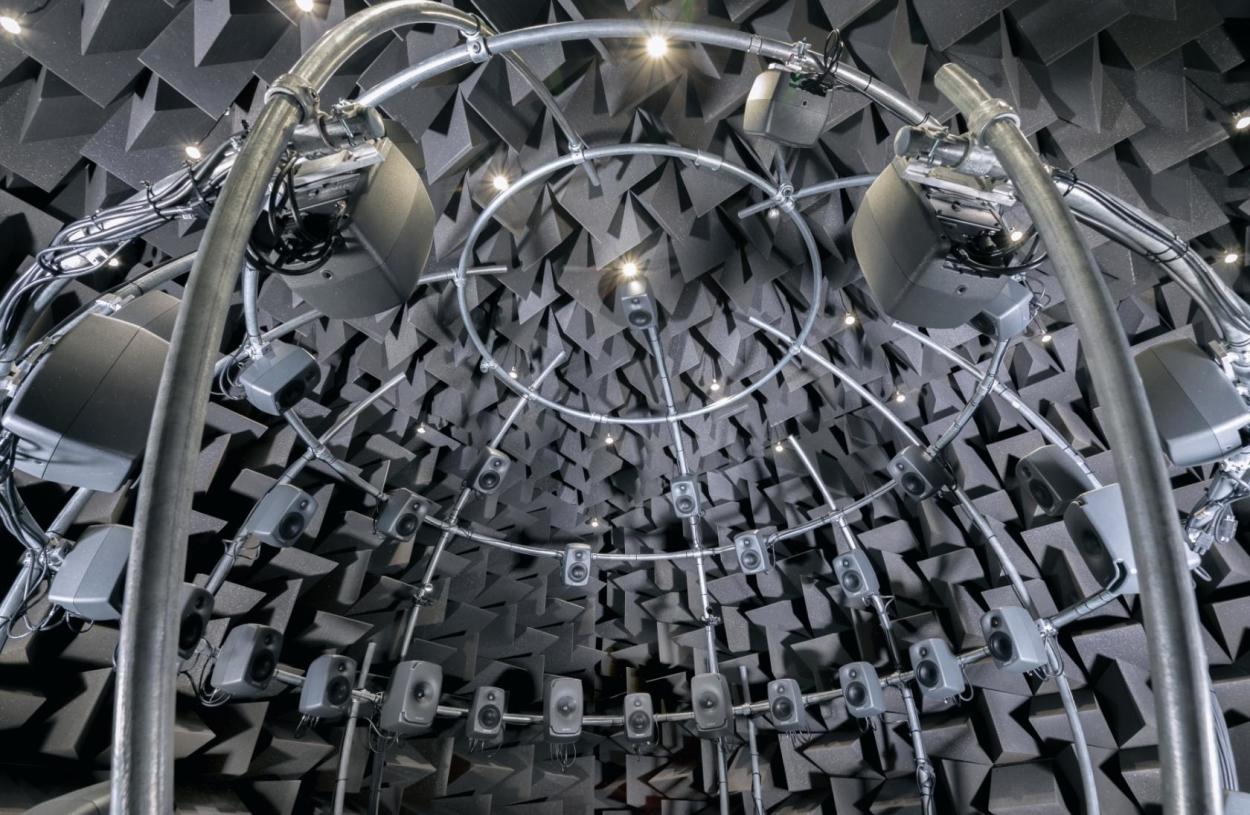 Danish electronics pioneer Bang & Olufsen has chosen Genelec SAM monitors to equip its new laboratory, which allows researchers at B&O’s Struer headquarters to create hyper-accurate simulations of how loudspeakers will sound in any given environment.

The loudspeaker sphere is based around a 3 metre diameter frame, constructed within an anechoic chamber, and utilises a network of thirty-five Genelec 8320 monitors, five 8331 three way coaxial monitors from The Ones series, plus four 7050 subwoofers to create instantly recallable sound fields ranging in format from simple stereo and 5.1 up to 22.2. The result is a one-of-a-kind environment which allows the listener to experience the acoustic conditions specific to a particular concert hall, car interior, living room or other acoustic space. 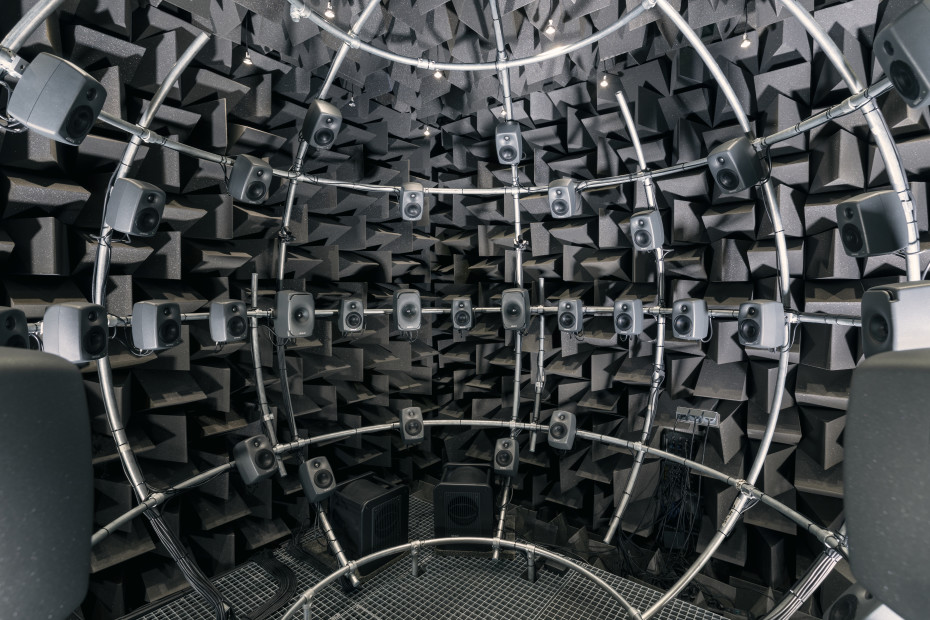 At the heart of the research project is the understanding and analysis of reverberation – what it is, how sound reacts with reflective surfaces, and how it can benefit - or detract from - the listener’s experience.

“We wanted to bring real life into the lab,” says Dr. Neo Kaplanis, a Tonmeister and lead scientist at B&O. Along with an EU-FP7 consortium, Kaplanis examined whether it is possible to compensate for reverberation effects with the goal of aiding B&O’s R&D department. 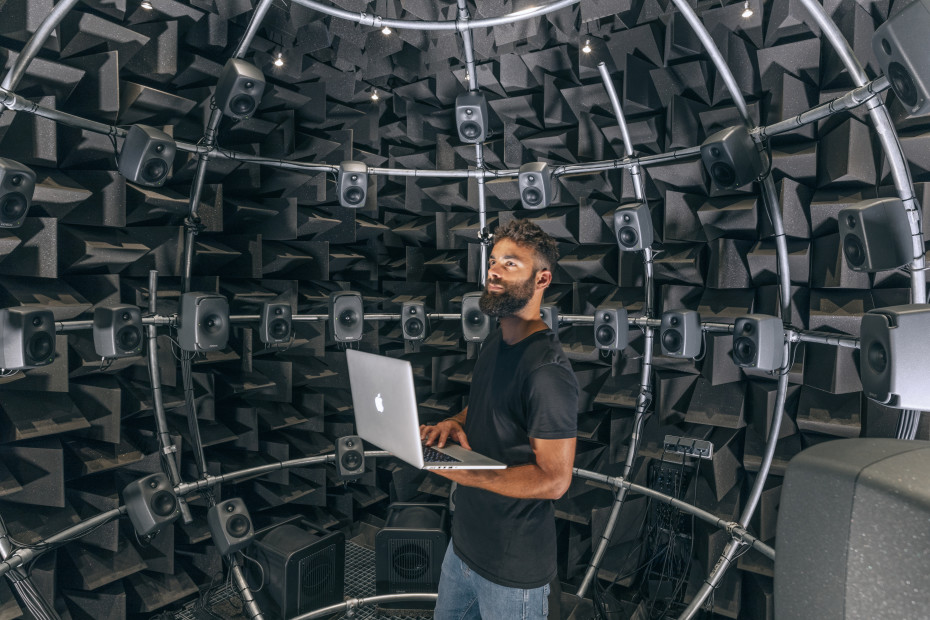 “Our acoustic memory is extremely short, and that makes it hard to remember for any length of time exactly what a particular loudspeaker sounds like,” he continues. “And when auditioning loudspeakers in a store, you have no idea what that same model would sound like in your own living room. We knew that the same loudspeakers don’t sound the same in different rooms, we just didn’t know what was different. So the idea of this project was to investigate and record the acoustics inside various spaces so that they could be easily simulated in a controlled environment.”

Kaplanis developed a new type of recording that captures the unique acoustic fingerprint of a space, and then designed a computer program that plays back sounds from those precise locations in the sphere.

The collaboration between Genelec and B&O is long-standing, according to Kaplanis’ adviser, Søren Bech, B&O Director of Research and professor at Aalborg University.

“Genelec is a highly engineering-based company with a similar philosophy to our own. We listened to several models, and decided that their SAM studio monitors would be perfect for what we are doing – recording the sound of a room, and then reproducing it so the listener can switch between either the same loudspeaker in different rooms, or the same room with different loudspeakers.”

Kaplanis adds: “We wanted a loudspeaker that was as transparent as possible – so when we send something to it, we expect it to come out exactly the same. Genelec are without doubt one of the best studio monitors you can get, and their super-controlled, wide-frequency directivity is a significant benefit for the type of work we are doing here. They are also very light and very small, and easy to place in the sphere.”

The integration of SAM monitors with Genelec’s own GLM software was central to the project, he continues: “It’s super convenient because you can update filters, select and mute individual speakers, group them, and control the volume of all of them at the same time. It’s easy to try different set-ups at the click of a button.

“Being able to test the sound of a loudspeaker in different acoustic environments in exacting detail - without physically going there - is of obvious benefit to us because we don’t have the knowledge of an individual listener’s living room conditions – but is now possible to simulate those conditions with a high degree of accuracy thanks to Genelec’s expertise in acoustic design and the precise reproduction of sound,” he concludes.

Genelec’s Senior Technologist Thomas Lund added: “With two world-class sphere facilities now within short driving distance of each other – the other one being at the University of Aalborg – Denmark has really geared up for new research and verification of results within the booming field of immersive audio. Binaural and in-room research both benefit from the point source radiation of The Ones series and GLM calibration, thereby limiting potential confounders.”