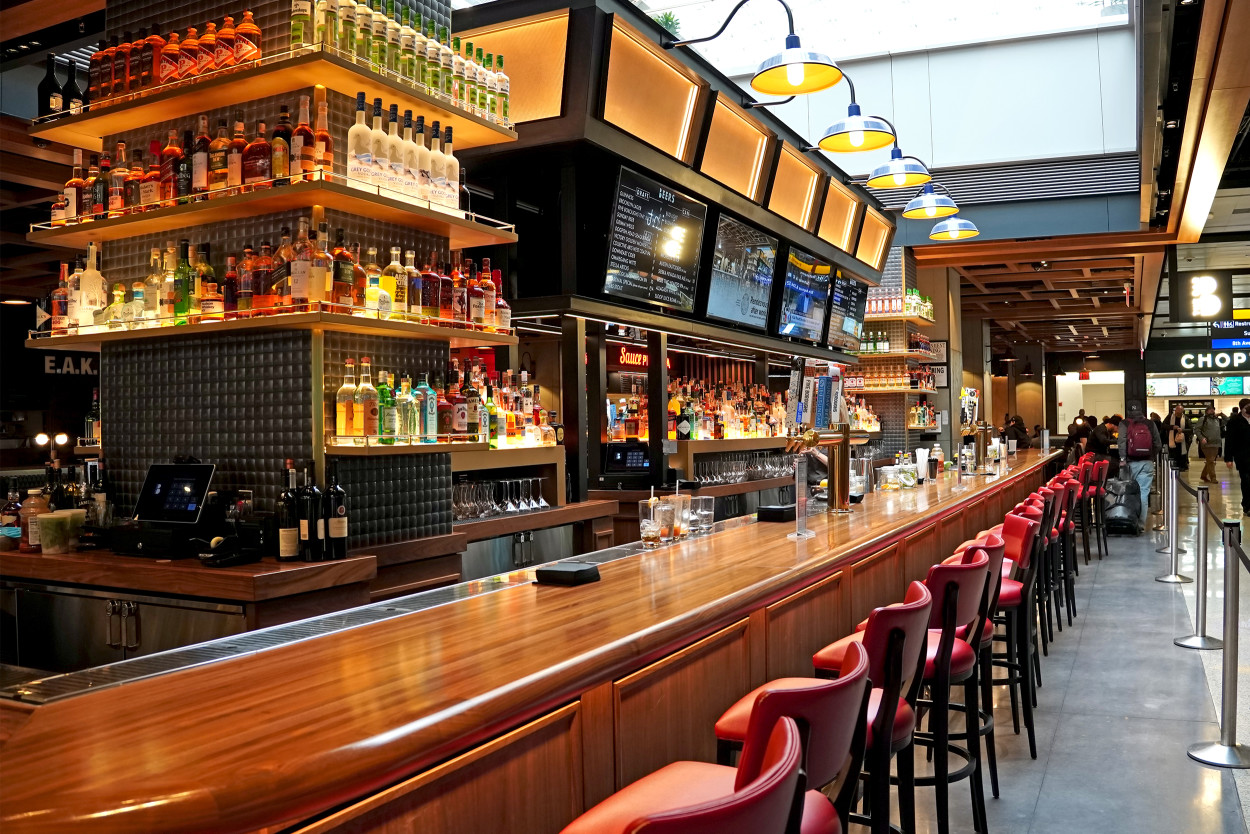 New York, USA – December 2022... Danny McDonald, one of America’s top pub business owners and one of New York City’s best-known restaurateurs, is known for being adept at the development, construction and operation of modern pubs. Starting in 1995 with the Swift Hibernian Lounge, which Crain’s New York contended “revolutionised the Irish Bar scene” in the city, his portfolio grew to include Puck Fair, Ulysses’ Folkhouse, Pier A Harbor House, and The Dead Rabbit. Now McDonald’s latest venture, called simply The Bar and located in Manhattan’s Moynihan Train Hall, continues his string of successful taverns, this one in the newly renovated Penn Station below the Beaux Arts-designed James A. Farley Post Office Building. The Bar, an elegant venue in dark walnut and polished brass, is a centrepiece of the Hall’s food court. In keeping with McDonald’s consistent quest for the best, he chose loudspeakers from Genelec to provide the audio aspect of the establishment’s carefully considered ambience. These loudspeakers offer power, audio signal and loudspeaker management via a single standard CAT cable, helping keep the setup simple and the cable management a breeze.

Specifically, 10 of Genelec’s 4430A Smart IP Installation Loudspeakers were installed at The Bar by Osbee Industries, Inc., a Harrison, NY-based system integrator that specialises in high-end projects. The Genelec loudspeakers are soffited in the ceiling of the actual bar area, supporting the eight television displays that make The Bar an elegant sports-watching venue. The AV system, designed by Osbee, is fully networked, with Crestron control and Symetrix processing, and 4430As are connected to that network via Dante®. “The Genelec loudspeakers, which Danny has used many times before in his restaurants, were the perfect choice here,” says Dave Raines, Osbee’s President. “They’re compact and fit into the wood soffit above the bar in such way that they’re practically invisible, yet still have plenty of output power. They’re compatible with Dante, as well as open streaming standards such as AES67, so they’re able to be networked, and they also have PoE functionality, which streamlines the system design. Plus, they sound fantastic, so they really check all the boxes.” In fact, this was Osbee’s first Genelec installation, and Raines was duly impressed with the Genelecs’ ease of installation and performance. “It was our first time using Genelec, but I can assure you it won’t be our last. It’s a great installation loudspeaker.”

Danny McDonald knows hospitality, but he also knows it’s not limited to food and drink. “We’ll want the atmospheres in the restaurants and bars to reflect the times and places and people,” he says. “We’ll want them curated for the moment.” At The Bar, across Eighth Avenue from Madison Square Garden, that means the venue will play music and show videos that complement what many patrons have come to see, whether it’s a Rangers game or a Billy Joel concert. “That’s where the Genelecs really shine,” he says. “They’re studio-monitor quality, so the sound is really excellent. We’ll have some acoustic music in here, such as jazz on Wednesdays, and the Genelecs give it elite-level sound.” But as importantly, the Genelecs help encourage the room’s natural social pace. “We call it ‘choreographed conversation’,” he explains. “If people are shouting to get the bartender’s attention, they’re doing it to get over the loudness of the sound system. It’s not supposed to be that way. We space the Genelecs out roughly eight feet apart, and it creates the perfect balance: you’re surrounded by music but you can talk easily, without having to shout, yet you still get the impact of the music. That’s the beauty of the Genelecs. They let us get the environment right.”