"Genelec, our Finnish studio monitor masters, have supplied us with a pair of the 8010a's for our tour travels in the US"

Children of Bodom is one the most successful Finnish metal bands. Band has relied on Genelec products already for years and along latest development their monitors were updated to new 8351 SAM series monitors.

Genelec GLM system makes it possible to have reliable monitoring even in challenging situations and use them where ever needed.

Over the last twenty years, Finland’s CHILDREN OF BODOM have incorporated many different musical styles into their celebrated sound, leading critics and fans to label them as melodic death metal, thrash metal, symphonic black metal, and neoclassical metal. Their enthralling mix of melodic hooks and instrumental acrobatics have solidified the band as one of the leading voices of music’s new generation.

Formed as Inearthed in 1993, the group is led by superstar frontman / guitarist Alexi Laiho, who was voted “Best Metal Guitarist” by readers of Guitar World magazine. COB albums are no strangers to debut positions on the American Billboard Top 200 chart and with three consecutive albums debuting at number one on Finnish album charts, they are one of their home country’s bestselling artists of all time with more than 250,000 records sold there alone. 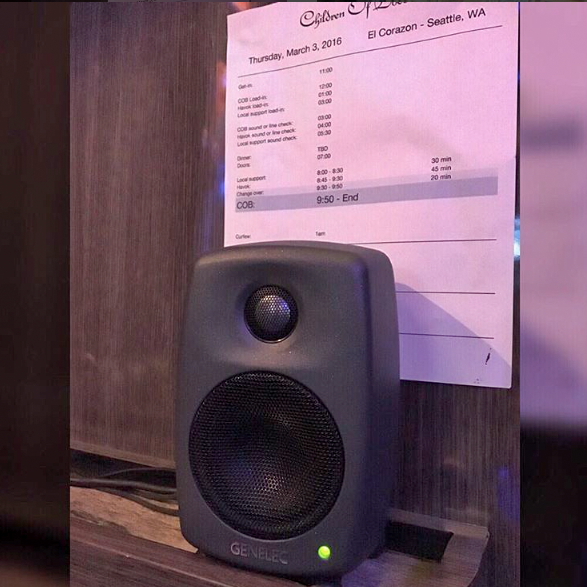 Genelec our Finnish studio monitor masters have supplied us with a pair of the 8010a's for our tour travels in the US. These (despite their size) are beyond amazing like all their products. We use only #Genelec in the studio for Bodom as well as Beyond Abilities Studios so having these out here with us is a serious treat. #madeinfinland #cobhc
A photo posted by Children Of Bodom (@cobhc) on Mar 3, 2016 at 7:16pm PST

In this video Kal Kaercher, Janne Wirman and Henkka Blacksmith are trying out the new system with a little help from Genelec guys.